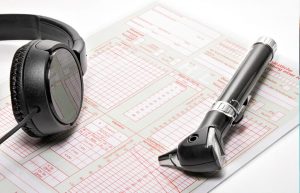 Sue was 16 months old when the speech therapist realized Sue was hearing impaired. However, the pediatrician did not want to give a referral because Sue had passed her newborn hearing screening. Testing revealed that Sue had been progressively losing her hearing in the last few months… and she now needed a cochlear implant!

Ken was 14 years old when he came for his auditory assessment. I asked mom why she had not done so earlier when the report she brought indicated the speech therapist recommended doing so 10 years prior? She responded that they had tested his hearing routinely in school throughout the years, as is standard practice. Sadly, mom thought a hearing screening was just as good as a hearing test.

So what is the difference?

A screening is designed to pick up an issue before it becomes a problem.
Once a person has a problem a comprehensive test, not a screening is what is needed.
For hearing, a screening is done by testing whether hearing is “good enough” in the “important” frequencies, only about half the sounds a hearing test covers (see graphic below).

However, 40% of hearing-impaired children who need amplification pass their newborn hearing screening.

1) Screenings do miss some people; they have to or we would have too many false positives.

2) Total blame cannot lie with insufficient sensitivity of the screening. You may have passed your vision screening in school but need glasses now, things change. With otitis media being such a common childhood condition, it is more likely for a child to pass a hearing screening and have a hearing loss the next day then to pass a vision screening and have visual impairment the next day. Furthermore, if this happened with vision you would see signs of disease or trauma. This is not usually the case with the hearing as the system is hidden.

3) Given the fluctuating nature of otitis media, the hard part can be catching the hearing problem.  Screenings are not sophisticated or comprehensive enough.  With a comprehensive audiological you are including frequencies most likely to be impacted by otitis media, which are excluded in the hearing screening.  Additionally, you can benefit from bone conduction testing which can reveal an air-bone gap, even if hearing is technically within normal limits.  Bone conduction testing is not part of hearing screenings, appropriately so.

4) The level of training of the examiner. While hospitals do employ audiologists to administer their newborn hearing screenings, schools do not.  An audiologist has 8+ years of training.  A lot can go wrong when a one-day training is the sole basis of an examiner’s expertise.  This approach may be penny wise but pound foolish.  In the short-term you may be saving the expense of the audiologist, but in the long run, when you spend tens of thousands of dollars on support services that are ineffective or of limited benefit because the student isn’t properly hearing the instructor, you have lost more than you have saved. Both in money and in time.  This approach also fails to recognize that the cost is not only for the level of education, but for the extra equipment as well (see #5).

5) Most importantly, a screening is not appropriate for someone who already has a communication problem that may be due to hearing difficulty. The level at which screenings are administered is 10dB louder than the level in which we expect a child to have academic, speech, language or social difficulty (see graphic below). It might seem like the simple solution would be to lower the screening level. However, this is not viable. Screenings are done in noisy schools or pediatrician offices. If we make the test softer, too many children will fail because of the competing surrounding noise. Your audiologist does testing in a special sound booth for this reason. 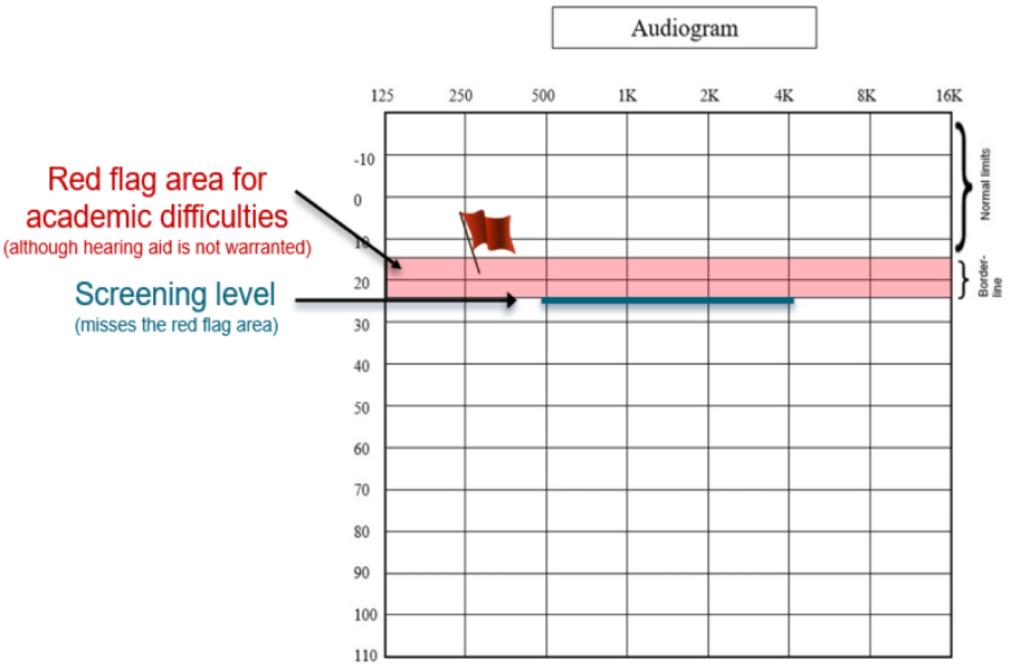 Learn from Ken’s parents mistake. Schedule a thorough hearing test if you have any communication related concerns. If the results of this test do not yield a borderline loss or worse, auditory processing should be examined next.

To schedule an evaluation at Hearing Kids go here